If Pigs Could Fly 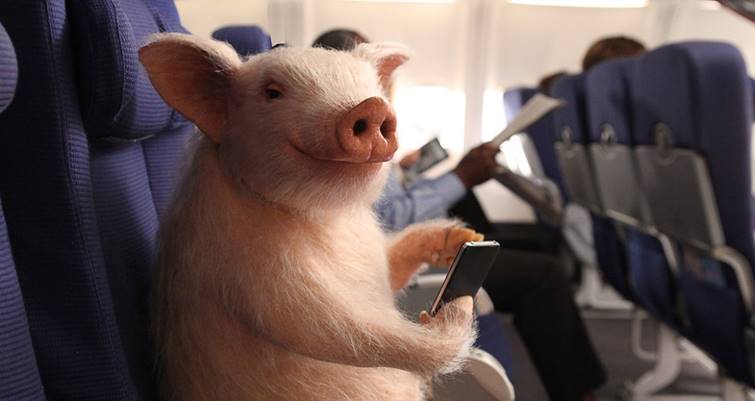 As a general rule, all things follow from a falsehood. You can truthfully say, “If pigs could fly, then I am King France.” (Note: Pigs really cannot fly! And I am really not the King of France.) This is an application of material implication, a logical operator characterized by the following truth table.

We can derive each line of the truth table using well known properties of material implication, i.e. those given by the self-evident rules of detachment and conclusion. We will also require the self-evident double negation rule.

We assume here that A and B are logical propositions that are known to be unambiguously either true or false. This does not mean that you have to know ahead of time which propositions are true and which are false. The rules of logic allow you to consider all possibilities and combinations.

Direct proof (Introducing =>): In a mathematical proof, if we assume A is true, and, without introducing any intervening assumptions, we can subsequently prove that B is also true, then we can infer that A => B is true. We can still infer that A => B if all intervening assumptions had previously been discharged and deactivated. (Note that in DC Proof, an assumption is called a premise.)

Proof By Contradiction (Introducing ~): In a mathematical proof, if we assume A is true, and, without introducing any intervening assumptions, we can subsequently prove that both B is true and B is false, thus obtaining a contradiction B & ~B, then we can infer that A is false (i.e ~A is true) As above, we can still infer that A is false if all intervening assumptions had previously been discharged and deactivated.

Following are formal proofs (in the DC Proof format) deriving each line of the above truth table and the most commonly used “definition” of material implication.

For proofs in standard FOL, see my MSE posting at Deriving the Truth Table for Material Implication.

– “The Paradoxes of Material Implication,” Wikipedia

Paradoxes? What “paradoxes?” As we have seen here, the usual “definition” A => B <=> ~[A & ~B] can be derived from the self-evident, elementary notions of classical logic.  The above "definition" of material implication would seem to fully capture the essence of the natural language "if-then" construct provided, of course, that we are talking about logical propositions are unambiguously either true or false. With that proviso, there is no "mismatch between the interpretation of the validity of logical implication in natural language, and its formal interpretation in classical logic."  From the above definition, we see that the logical expressions A => B and ~[A & ~B] are logically interchangeable, always having the same truth value for any logical expressions A and B. Using this interchangeability (the Imply-And Rule in DC Proof), each of the above mentioned “paradoxes” can be trivially resolved based on the same self-evident, elementary notions of classical logic (see proofs below).

Each of the following is a proof by contradiction, the first line being a negation of the require result. Each implication is then replaced by the required negation.

These “paradoxes” are the inevitable, if somewhat counter-intuitive results of the self-evident, elementary notions of classical logic as discussed above. It is not the rules of logic that must be changed to reflect usage in natural language, but the other way around. Implication should not be seen in natural language as having to do with causality, but simply with a coincidence of a pair of possibly unrelated truth values in the moment.

Summary of what students should now about logical implication:

2.     A => B has meaning only for logical propositions A and B that are unambiguously either true or false. These propositions need not be related in any way. Do either of the following to prove that A => B is true:

b.     Assume B is false, then prove that A is false. (Proving the contrapositive.)

e.     Prove that B is true.  (From all propositions will follow that which is true.)